Anyone working in the field of senior caregiving knows how important it is to find meaning in our work and service. Author Simon Sinek tells us to Start with Why. I’m haunted by the memory of a man who reminded me of why I continue to love senior caregiving.  I met Frank in a nursing home where I was teaching a Compassionate Touch workshop.  I first noticed him because he wasn’t particularly old, at least not by senior care standards, and because he was tall and muscular. He was sitting in a corner in the hallway near the nurse’s station. By his appearance, I was pretty sure he had suffered a stroke some time back.

During the first two days of the training, my students and I went about our business interacting with elders and memory care staff. On the third day, I noticed Frank sitting in the same spot– for hours, just sitting there.  He didn't interact with anyone and seemed frustrated. He restlessly pushed on the wheelchair footrests. The wheelchair was locked so he couldn’t go anywhere and I’m pretty sure he couldn’t propel the wheelchair himself. Lots of people passed by in the hallway, but no one paid him much mind. He seemed invisible. And lonely. And really frustrated.

Frank is exactly the person I love to seek out to serve.  So, on the third day I pulled up a chair and sat next to him, introducing myself and there was immediate eye contact. While he had trouble with speech, he still could carry on a conversation. He told me he was a veteran and grew up in Illinois. I also learned that he believed his age to be 37. Other signs of confusion were there, too.  I held his hand and arm  affected by the stroke. He was receptive to touch. I asked if his back was uncomfortable. He indicated yes, so I gently rubbed his shoulders and He told me it felt good and with very clear speech, thanked me.

The next day he was again sitting in the same spot. I asked him if he would like to sit somewhere else. He pointed to a spot about six feet
away that was near a desk. With a little effort, because of his size, I maneuvered his wheelchair around so he could reach the desk with his hands. He reached out took hold of a newspaper and proceeded to read it! Regardless of his reading comprehension, he engaged in something purposeful that clearly meant something to him.   The restlessness stopped.  I sat with him about five minutes and I saw a glimmer of a sense of humor. As I left, he took my hand and said “thank you for stopping.”

Now, Frank's memory haunts me. In a bad way and a good way. Bad because his plight troubles me since I’m pretty sure that he is sitting in that same corner spot as I write this. Invisible again. However, good because Frank is a gut-check of why I do what I do.  Thank you, Frank, for reminding me of  why I love senior caregiving.

Dementia - Let's Imagine You have it

Let’s imagine that you have dementia. What would you miss? What would you forget about that you enjoy? We all forget the details of our lives and often take the little... 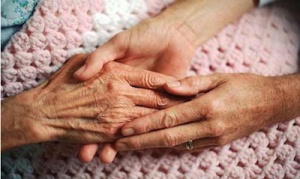 Why Touch Works in Dementia Care

What is it about skilled touch that decreases distress for those living with dementia that can lead to behavioral symptoms?  Common responses include decreased aches and...